Understanding the Stages of Memory Loss

When making care decisions for a family member who is showing signs of memory loss, dementia or Alzheimer’s, it’s vital to understand the stages that they may go through. By having a better understanding of the changes in behavior and abilities, you can choose the most effective course of action for your loved one’s treatment and care with the help of doctors and caregivers.

The following stages are based on the Reisberg Scale, developed by Dr. Barry Reisberg of New York University. Ultimately, the stage of dementia will be determined by a doctor through the use of tests and examinations. To help make the stages more relatable, we’ll outline some real-world scenarios to go with the more clinical definitions.

There are no outward signs of memory loss or dementia, and your loved one’s behavior and mood is unchanged.

“Laura is still keeping a very full calendar, from volunteering at the local hospital to meeting her friends for lunch a few times a week. She’s sharp as a tack, too. She’s started working on digital photography courses and picked it right up.”

The second stage of dementia is largely one that the person subjectively notices happening to themselves. Typical examples would be someone thinking they don’t remember names as well as they used to, or temporarily forgetting where their keys are more often. If someone seems to be in stage 2, some studies have shown that they may progress more rapidly through the following stages.

“Paul feels that he’s more forgetful when it comes to places and names, but that it’s not affecting him at work. He’s getting older so it’s probably just typical stuff for someone his age.”

In this stage, changes begin to be noticeable by friends and family. The person can probably get through their daily routine, but a range of symptoms can be observed. There can be higher levels of forgetfulness and memory loss, including more repetitive questions from the person. More complex activities that involve planning and organizations can become challenging, which can be particularly worrisome when it comes to staying on top of medications. There can also be a loss of concentration, higher levels of anxiety, and overall confusion.

Stage 3 is where initial Alzheimer’s testing typically occurs, so be sure to encourage family members to be tested.

“Jackie is really starting to worry me because she’s still trying to do everything she’s used to doing, but she has trouble with her memory. I can also tell that she gets frustrated when she notices it happening.”

For people in this stage, tasks like cooking, shopping and cleaning are very hard to accomplish without assistance. Issues with memory loss and forgetfulness intensify and should be very apparent to casual acquaintances. Proper speech and “finding the right words” can be a challenge as well.

There can also be noticeable psychological changes, most often seen in a withdrawal from social situations. Oftentimes, this is driven by a state of denial where the subject knows their mental facilities are in decline, but don’t want to admit it, even to themselves. Rather than engage in a conversation and forget a name, or try to order from a menu and misspeak, they will avoid the situation.

This stage is also named mild Alzheimer’s disease, and diagnoses in this stage are often very accurate.

“I’m glad Les has his family close by because he’s really been in decline the last few months. It has to be hard on them to assist in more and more activities, especially as he seems to be more and more withdrawn.”

When a person enters this stage of dementia, they typically need frequent assistance to make it through their daily activities. There is often an inability to recall basic, deeply engrained information, such as phone numbers, home address, or schools attended.

Someone in stage 5 would have great difficultly living an independent life. They may need assistance in a variety of areas, from picking the proper clothes for the weather to eating normal, healthy meals to handling basic tasks like paying a bill.

“When I saw Mari the other day, she was wearing short sleeves even though it was 40 degrees outside. I’ve also noticed her not being able to recall her home address, which makes me glad she has someone coming to provide in-home care every day.”

In stage 6, having full-time care is a must for most patients. They often need help in order to properly dress, bathe or use the bathroom. Things that seem as simple as flushing the toilet will be forgotten, leading to cleanliness and sanitary issues within the house.

The memory loss can also manifest itself in the person wandering or getting lost, and forgetting the names of family members. A breakdown of speaking ability can often occur later in this stage, making it harder for family members and caregivers to meet the needs of the person. Emotional and behavioral changes can be quite troubling in this stage as well, as those afflicted with severe dementia can be increasingly paranoid and hostile.

“John’s family seemed very distraught when discussing his current condition with me. They’re so worried about his behavior that they’re cutting back on visits from friends to see him. Plus, he’s at a stage where things that would be very embarrassing are routinely happening and they want to protect people’s good memories of him.”

Stage 7 is the final stage of dementia and patients require full-time care. Moving, eating, talking can be nearly impossible for some people, so even trained caregivers can find themselves taxed by the needs of the patient.

Symptoms of this stage often include a loss of the ability to speak and communicate, a loss of awareness for people and surroundings, and the loss of motor control, which can lead to an inability to control facial expressions.

“It’s troubling to visit Doris these days as there isn’t much of her personality or even physical state left that you would recognize. Thankfully, she has very patient and caring people looking after her who are trying to make her final days as good as they can be.”

If you can identify signs of dementia from any of the stages outlined above in your loved ones, please reach out to their primary caregiver to begin the process of testing. Early detection can be very useful in managing the progression of the disease and also give you time to plan the approach to caregiving that is right for your family, whether it’s assisted living, friends and family, or in-home care from trained nurses. 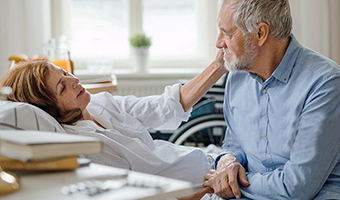 The Impact Grandchildren Can Have in Senior Care