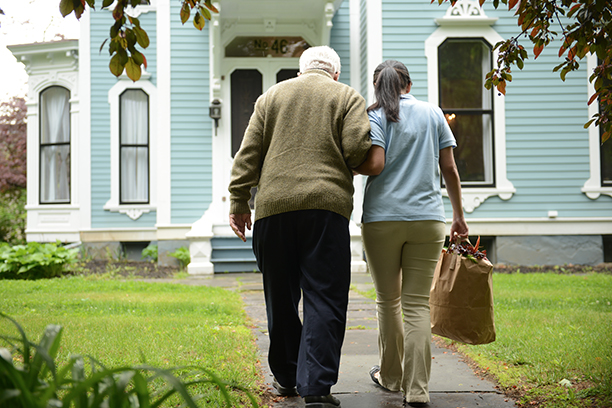 Alzheimer’s is a progressive, degenerative brain disease characterized by memory loss, cognitive decline, and behavioral changes. Over time, these symptoms will get worse, typically over multiple years, and can severely affect one's day-to-day tasks and activities.

This disease is considered terminal with an average life expectancy of 4-8 years after diagnosis-- however, some people live for 15-20 years after being diagnosed. This disease is the 6th leading death in the United States, with the majority of those people being adults over the age of 65. On the other hand, Early Onset Alzheimer’s affects approximately 200,000 Americans under the age of 65, according to the Alzheimer’s Association.

If you or a loved one have recently been diagnosed with Alzheimer’s, there are sure to be many questions. We provide this FAQ to give you answers from elderly care professionals from Visiting Angels. Learn more about Alzheimer’s below.

Dementia is an umbrella term used to describe a list of brain disorders characterized by memory loss. The most common of these is Alzheimer's; estimates have shown that Alzheimer’s cases account for somewhere between 60% to 80% of all cases of dementia.

Scientists still don’t know the exact cause of Alzheimer’s, but they have narrowed it down to several risk factors that can be cared for with elderly care services.

The three most significant risk factors are as follows:

The most common symptoms of early Alzheimer's are shown through a person’s speech, thought patterns, and behaviors.

Many scientists believe that this disease begins early in life, before symptoms start even to show. With symptoms tends to show in adults in their 40’s-50’s. Showing symptoms is a gradual, progressive disease with symptoms that become worse over time; as they get worse elderly care is often one’s best choice.

Symptoms begin mild and will have minimal impact on the person’s well-being; overtime the disease will start to progress, and the symptoms will develop from mild to moderate to severe. In the final stages, a person may lose all short-term and long-term memory, the ability to speak and understand speech, and perform basic personal activities, such as how to use the bathroom or eat on their own. Learn how to prepare for the stages of Alzheimer’s.

There is no known cure for Alzheimer’s disease, similarly the disease’s progress is believed to be irreversible. Researchers are continuing to search for the cure. Still, modern treatments and clinical trials are limited to slowing the onset of the disease, delaying its initial symptoms, or reducing its progress.

Medical professionals recommend that those at risk or living with this disease focus on living a healthy lifestyle-- they should mainly focus on cardiovascular health. Improving one's sleep habits, increased omega-3 intake, and decreased stress have also reduced the risk. Elderly care services can help monitor seniors day to day living style.

As one’s Alzheimer’s disease gets worse, they will begin to require a more advanced type of elderly care to ensure their safety. During one’s early and mid-stage Alzheimer’s, they are usually cared for by a loved one and friends. Once the disease has hit its final stages, professional elderly care is often required, like Visiting Angels Alzheimer’s care or elderly care.

There are multiple options-- like moving your loved one into a nursing care facility that may often offer a type of elderly care. Nursing facilities is typically a last resort because of how traumatic it can be. Another option is Alzheimer’s elderly care home services, such as those offered by your local Visiting Angels. Alzheimer's is a specialized care designed around the unique challenges of the disease and the recipient’s individual care needs. This care is often provided in the comfort of the individual's home from caregivers who are uniquely qualified to care for individuals living with Alzheimer’s. Learn more about Alzheimer’s care services offered by Visiting Angels today, or contact your local Visiting Angels office to request a free consultation for elderly care.