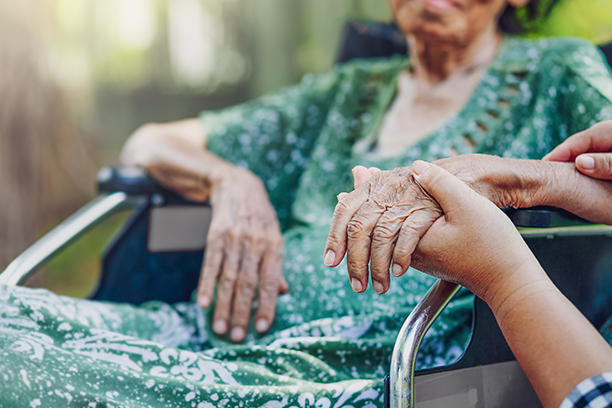 Alzheimers FAQs and How Visiting Angels Provides Helps for Alzheimers Patients in Anderson, IN and the Surrounding Area

You or your family members may not know what Alzheimer’s disease is, or looks like, or how to find help for Alzheimer’s patients. Alzheimer’s is a progressive, degenerative brain disorder that is characterized by memory loss, cognitive decline, and behavioral changes. As time goes by, typically over a few years, the symptoms do get worse leading to daily tasks and activities being affected. Doctors consider Alzheimer’s a terminal condition, with patients averaging a 4-8 year life expectancy after being diagnosed—however there have been cases where individuals have lived 15-20 years post diagnosis. This disease is this sixth leading cause of death in the United States—roughly 5.5 billion individuals suffer from Alzheimer’s, the majority of these individuals are aged 65 and older. On the other hand, according to the Alzheimer’s Association, early on-set Alzheimer’s effects 200,000 Americans aged under 65.

If you or a loved one have been diagnosed with Alzheimer’s, it is normal to have some questions. This FAQ provides help for Alzheimer’s patients and their families from care professionals at Visiting Angels®. Learn more about Alzheimer’s below.

Researchers are still looking for the exact cause of Alzheimer’s and more ways to help for Alzheimer’s patients, but they have been able to identify a few risk factors.

The most common symptoms, especially in early on-set Alzheimer’s, are expressed through the individual’s speech, thought patterns, and behaviors.

Scientists believe that people who suffer from Alzheimer’s may have actually had it for many years prior to showing any indications. Symptoms tend to start showing in older adults, though there have been cases of them showing up in 40 or 50-year-old adults. The disease is gradual and progressive with the symptoms becoming worse over time.

The symptoms can come on mild at first with minimal impact on the individual’s well-being. As the disease begins to progress the symptoms will start to develop from mild, to moderate, to severe. By the time the individual reaches the final stages of the disease they may lose all their short-term and long-term memory, the ability to speak and understand speech, as well as how do personal care for themselves, such as using the restroom or eat alone. Learn how to find help for Alzheimer’s patients and prepare for the stages of Alzheimer’s.

At this time, there is not a known cure for Alzheimer’s; while this disease’s’ progress is believed to be irreversible, there are ways to receive help for Alzheimer’s patients. Scientists are continuing to try and find a cure; while there are modern treatments and clinical trials are being used to try and find a way to slow the diseases onset, delay its initial symptoms, as well as reduce its progress. It is recommended by professionals that those who are at risk or are living with Alzheimer’s to focus on their cardiovascular health as well as living with healthy lifestyle choices. Focusing on improving sleep habits, increasing omega-3 intake and decreasing stress have also been shown to reduce the risk.

Visiting Angels provides specialized care to meet the unique challenges of the disease. Care is provided in the individuals home by caregivers that are qualified and trained to care for individuals with Alzheimer’s disease.

Learn more about getting help for Alzheimer’s patients from Visiting Angels today or call 765-703-4194 to request a free consultation.