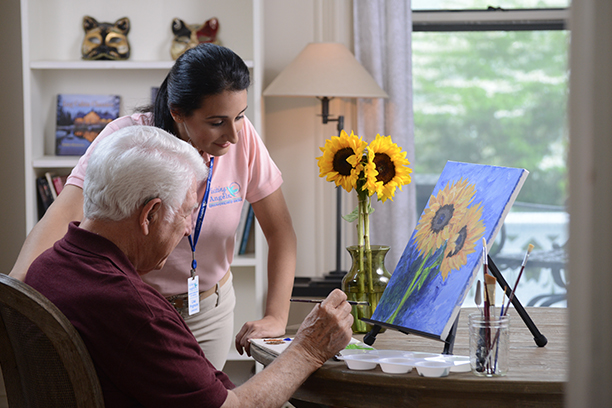 FAQs and Alzheimer's Resources for Families in Hoboken, NJ and the Surrounding Area

Alzheimer’s disease is a progressive, degenerative brain disorder that is characterized by memory loss, cognitive decline, and behavioral changes. Roughly 5.5 million Americans, the majority of whom are older adults (over the age of 65), are living with Alzheimer’s. However, Early Onset Alzheimer’s affects approximately 200,000 Americans under the age of 65, according to the Alzheimer’s Association.

If you have a loved one who has recently been diagnosed, you likely have many questions. The following are Alzheimer's resources from Visiting Angels of Hoboken, a local agency of home health aids and caregivers.

Symptoms typically start to appear in old adults, though some cases of Alzheimer’s begin in a person’s 40’s or 50’s. At first, symptoms will be mild and will have minimal impact on the person’s well-being. By the final stages of the disease, the person may lose all short-term and long-term memory, the ability to speak and to understand speech, and the ability to perform basic personal activities, such as how to use the bathroom or eat on their own.

Click for Alzheimer’s resources and to learn how to prepare for the stages of Alzheimer’s.

Despite the vast amount of Alzheimer's resources, there is currently no known cure for Alzheimer’s disease, and the disease’s progress is believed to be irreversible. Modern treatments and clinical trials are limited to slowing the onset of the disease, delaying its initial symptoms, or reducing its progress.

Another option is to hire Alzheimer’s home care services, such as those offered by Visiting Angels of Hoboken. This specialized in-home care helps individuals in Hoboken, NJ and other nearby cities live with Alzheimer’s disease in the familiarity of their own home.

Alzheimer’s home care is distinct from traditional home care, since individuals with Alzheimer’s have distinct care needs from other seniors. Visiting Angels of Hoboken’s specialized care is designed around the unique challenges of the disease, as well as the recipient’s individual care needs. Care is provided in the comfort of the recipient’s home, and services are performed by caregivers who are uniquely qualified to care for individuals living with Alzheimer’s.